Abstract
The Death Wish of Humanity:
Religious and Scientific Apocalypticism in the United States, 1859-2001
By Lisa Roy Vox
Scholars writing about modern American apocalyptic beliefs tend to separate the
secular from the religious. The most prominent form of popular religious apocalypticism
in the twentieth century U.S., dispensational premillennialism, developed among
American conservative Protestants at the same time that the beginnings of a scientific
apocalyptic was being articulated in the late nineteenth century. These two forms of
apocalypticism matured alongside each other in the United States, ultimately converging
on the twin threats of nuclear war and environmental destruction after World War II.
Though their adherents usually differed politically, there is a surprising amount of
correlation between the two accounts of the end. Conservative evangelicals writing on
Bible prophecy believed that scientific revelations about the effects of nuclear weapons
as well as environmental threats provided insight into how to interpret prophetic books of
the Bible like Revelation. Scientific apocalypticists, in the form of scientists writing
popular works and science fiction authors grappling with the same issues, struggled to
find solutions to these threats and give meaning to human existence in the face of such
catastrophe. The result was that American religious and scientific visions of the end, far
from being diametrically opposed to one another, became more compatible during the
twentieth century. This continued right up until the millennium, when the slow fracturing
of scientific authority that took place over the last half of the twentieth century began to
be reflected in both the religious and scientific apocalyptics.

The Death Wish of Humanity:
Religious and Scientific Apocalypticism in the United States, 1859-2001
By
Lisa Roy Vox
B.A., Rhodes College, 1999
M.A., Emory University, 2004
Advisor: Patrick N. Allitt, Ph.D.
A dissertation submitted to the Faculty of the
James T. Laney School of Graduate Studies of Emory University
in partial fulfillment of the requirements for the degree of
Doctor of Philosophy
in History
2010

1 The Origins of Modern Apocalypticism 28

4 Environmental Disasters and the Judgment of Humanity 148 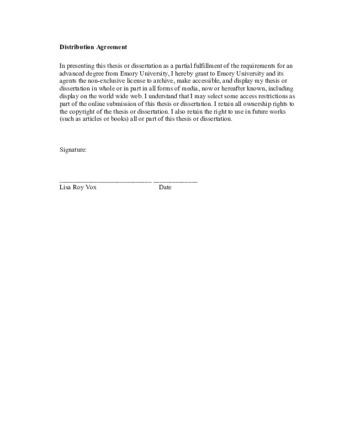