Intimate partner violence (IPV), defined as “any pattern of purposeful behavior through which an intimate tries to control the thoughts, beliefs, or actions of another intimate, or tries to punish the intimate for a real or imagined transgression or for resisting the perpetrator’s control…” is endemic to the Caribbean region. Studies have demonstrated the severity of IPV in the Caribbean, suggesting that, on average, 46% of women have experienced at least one form of violence in their lifetime. Caribbean feminists have centered issues of IPV in their praxis and advocacy for some decades, but their progress has been marginal at best. My project seeks to supplement pre-existing forms of Caribbean feminism, arguing that the terminal goal of a postcolonial Caribbean feminism is indeed misguided, neglecting the roots of colonialist destitution that have cultivated structures that require postcolonial chiseling to flourish. By completing a historical analysis of the movement’s origins, I conclude that Caribbean feminism finds its roots in the struggles of (white) Western women, and thus a direct translation of thought and activism onto Caribbean soil has stunted the movement and its potential for progress. Carceral feminism, specifically, serves as a major point of scrutiny as I examine the efficacy of Trinidad and Tobago’s Domestic Violence Act (1991) as demonstrable of feminist advocacy and its terminal goals. Through a closer examination of such acts and an epistemological insistence of the implementation of a non-Western feminism and philosophy within the region, I propose various starting points for the foundation of a more useful feminism. Employing Lyndon Gill’s conception of erotic subjectivity, I further argue that a return to a recognition of the subject as erotic, as a simultaneously political-sensual-spiritual being, shifts our collective perspective towards the development of a postcolonial episteme, one that may further supplement Caribbean feminism in achieving its goals beyond carcerality. The utility of a non-Western philosophy may be used to deconstruct the ‘universal woman’ imposed by Western feminists and situate Caribbean feminism fully towards a future in which issues such as IPV may be addressed in its entirety.

Chapter I. Structures of Colonial Domination and how to Escape them 9 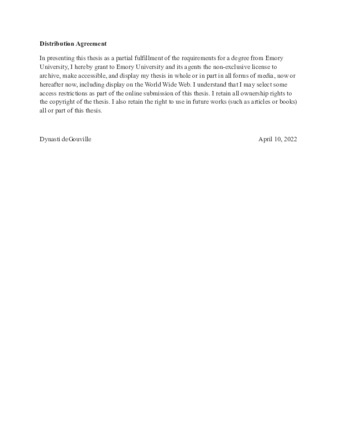