CXCR4 is a G-protein-coupled receptor that has only one natural ligand, CXCL12. Upon the binding of CXCL12, pathways downstream of CXCR4 such as pro-survival, proliferation, chemotaxis signaling, and transcription of immunosuppressive related genes are triggered. Cancer cells that overexpress CXCR4 can be attracted to CXCL12 rich niches and recruit immunosuppressive leukocytes. Inhibition of CXCR4 with small molecule antagonists can make the cancer cells more susceptible to chemotherapy drugs and the immune system and less likely to metastasize. EMU-000172 is one of a series of tetrahydroisoquinoline-based CXCR4 antagonists developed by Liotta group. It has a good predicted passive diffusion rate but still requires improvement in its off-target effect and metabolic stability. A series of morpholine analogs were chosen to replace the morpholine on EMU-000172. 11b and 12 were the first two to be synthesized. The approaches applied to synthesize 11b suffer from low conversion rates and a large amount of byproducts. However, with a Buchwald-Hartwig amination condition different from those previously used by other group members and a tailored TFA-mediated N-Boc deprotection, the effort to make 12 resulted in a good yield.

Figure 4. Morpholine analog candidates and the position of their oxygen relative to the original morpholine oxygen.

Scheme 3. N-Boc group deprotection of 11a with TFA 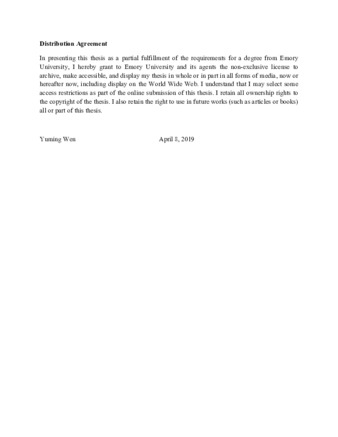