Background: Three years after the partial decriminalization of abortion in Colombia in 2006, less than 3,000 legal abortions have occurred, while 320,000 - 450,000 unsafe abortions continue to occur annually. National data shows that 27% of pregnancies are unwanted. Unsafe abortions caused 28% of all maternal deaths in Colombia, of which rural, poor and indigenous women were disproportionately affected. Yet, little data on unwanted pregnancy and induced abortion decision-making exists since this change in the law among women in the Amazon region. Objectives: To understand the social and cultural perceptions, and individual experiences of unwanted pregnancy and induced abortion among residents in the Amazon Region of Colombia. To elucidate the process by which women decide to abort or continue an unwanted pregnancy. Methods: 6 focus group discussions, which included ranking activities, were conducted separately among males and females. 13 in-depth interviews were conducted with women between 15-44 years of age, who had at least one unwanted pregnancy in their lifetime. Results: Regardless of their decision, all women experienced the same stages in their decision-making process: knowledge, social and economic concerns, disclosure, contemplation of pregnancy outcomes, decision, and acceptance. A woman's decision was indirectly influenced by the advice provided by the maternal confidant and directly influenced by her relationship status at the disclosure stage. Women who decided to continue the pregnancy did so because they disclosed the pregnancy to a partner who desired the pregnancy. Women with less supportive partners, decided to continue the pregnancy in hopes that it would strengthen their current relationship. Women who did not have a partner at the time of disclosure decided to abort the pregnancy, in addition to other factors, which varied by age. Younger women's abortion decision was directly related to being single and a desire to continue school. Older women tended to abort due to marital problems. Discussion: Decision making processes relative to unwanted pregnancy and abortion are intrinsically bound to socioeconomic and relationship factors. There is a need for future research in the Amazon region of Colombia that emphasizes the roles of the partner and maternal confidant at pregnancy disclosure.

Contribution of the student 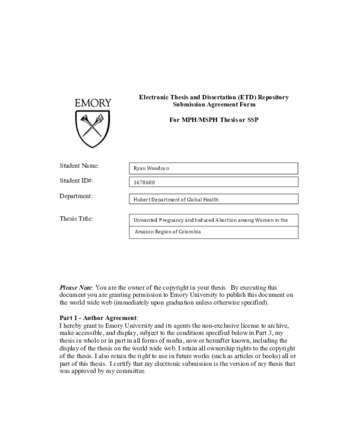