Major depressive disorder (MDD) is a common, disabling condition. Poor decision-making
contributes to the physical morbidity, role dysfunction and suicide risk in MDD patients, but little research has attempted to objectively measure decision-making in
MDD. "Loss aversion" is a behavioral economic measure of the degree to which individuals
demonstrate greater sensitivity to the possibility of losing objects or money than to the
possibility of gaining the same objects or amounts of money. This study aimed to identify
whether loss aversion differed between patients with MDD and healthy controls (HC). Subjects completed a three-hour process of evaluation and testing in order to
"earn" $100. One week later, they completed a decision-making task during a
functional magnetic resonance imaging scan. The decision-making task involved presenting
120 trials of risky decisions which participants chose to accept or reject. Each risky decision
represented an equal chance of adding to or losing some of their $100 endowment.
The amount to be won or lost varied from trial to trial. Twenty-four HC and 19 MDD participants completed
the study. Two methods for calculation of loss aversion were employed. In the subject-level
analysis, mean loss aversion for the two groups differed significantly (HC: 1.64 ± 0.78,
MDD: 1.19 ± 0.49, p=.032). However, after removal of 2 outliers, the difference was no
longer significant (HC: 1.53 ± 0.55, MDD: 1.25 ± 0.41, p=.085). In the representative agent
analysis, mean loss aversion was nearly identical between the groups. Regression analyses suggested impulsivity was associated with greater loss aversion, and that
there was an interaction between risk-taking and mood state. These results suggest that at a group level,
there are no meaningful differences in loss aversion between MDD and HC subjects.
However, MDD occurring in a person with low impulsivity but high risk-taking may reduce
sensitivity to loss, thereby contributing to poor decision-making.

Loss Aversion in Major Depressive Disorder
MD, Mayo Medical School, 1997
BA, Washington University, 1990
Advisor: Gregory S. Berns, MD, PhD
A thesis submitted to the Faculty of the James T. Laney School of Graduate Studies of
Emory University in partial fulfillment of the requirements for the degree of
Master of Science in Clinical Research
in Medicine
2012 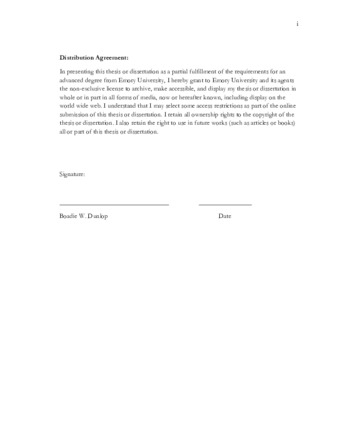