Ocotal, a relatively isolated city in the North Central region of Nicaragua, is characterized by severe poverty and limited sources of sexual and reproductive (SRH) care. National data suggest unintended pregnancies are more frequent in Ocotal compared to other major cities. Existing research does not adequately explain why unintended pregnancies are more common in this region. Focus group discussions (FGDs) and in-depth interviews (IDIs) were utilized to explore women's experiences with unintended pregnancy as well as the context surrounding such experiences. From May to August 2014, three FGDs and ten IDIs were conducted in Spanish with young women ages 16-27 years old from various neighborhoods in the city. FGDs were completed with groups of women to elucidate community norms regarding the topics of interest: access to SRH services, knowledge of sexual and reproductive rights, and opinions of the total ban on abortion. The FGDs informed subsequent IDIs, in which individual women shared their personal experience with an unintended pregnancy. Women identified numerous barriers to accessing SRH services, such as: criticism by others, violence against women (VAW), machismo, and lack of open communication with parents and partners. Though participants had limited formal knowledge of sexual and reproductive rights, they were able to provide examples of such rights. Women believed their sexual and reproductive rights originate from national laws, such as Law 779, which is meant to eradicate VAW. Due to religious ideologies, most participants agreed with the country's total ban on abortion, except in the case of rape. Women also had extremely varied experiences with unintended pregnancy due to: familial support, employment status, relationship with the biological father, and other factors. The findings of this study provide context for the high prevalence of unintended pregnancy in Ocotal and describe the complex interactions between multiple factors that the study population believes are related to unintended pregnancy, including Law 779 and the total ban on abortion. The findings of this study serve as the foundation for future interdisciplinary research and offers suggestions for potential interventions at the neighborhood, city, and national levels to advance women's autonomy and improve SRH outcomes in Ocotal, Nicaragua. 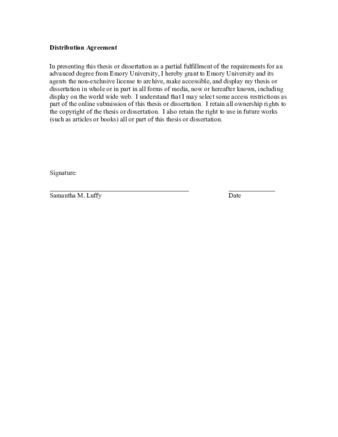