Media has been described as both influencing and reflecting social perceptions of reality. What the media chooses to and not to publish, and how those issues are addressed, can be reflective of social discourse around the subject.This study functions as an exploration into how HIV and AIDS were positioned in the context of local print media discourse in order to inform an analysis of larger public conversations around the illness. Three different local newspapers were used in this analysis - The Atlanta Journal-Constitution, Atlanta Inquirer and Creative Loafing - with each one catering to different sub-populations within Atlanta and characterized by distinctive publishing capacities. The language in and the frequency of reports on HIV and AIDS were used as proxies to determine public attitudes towards and the import of the epidemic in local discourse. Semi-structured interviews were conducted with local physicians and researchers to provide a context through which the results can be interpreted into local perceptions. Textual analysis shows that the frequency of reporting on HIV and AIDS across different newspapers were mediated by the perceived risk that their readers had of contracting HIV. The nature of the discussions of HIV and AIDS in the articles can be grouped into four chronological stages designated by overarching conceptualizations asserted in the newspapers: othering the illness to at-risk populations, reinforcing the risk that HIV/AIDS poses to everyone, differential levels of attention to global versus local epidemics and generalized lack of discussion about HIV/AIDS. The four stages of newspaper reporting are evidence that, just as the epidemiological manifestations of HIV/AIDS have changed over time, so too have people's understandings of the illness and those living with it. This study further surmises that the discourse around HIV and AIDS in local newspapers cannot be disentangled from the historical and cultural context of metropolitan Atlanta and the south-eastern region of the United States.

Significance of The Project 1

Cultural Context of the start of the AIDS epidemic in Atlanta, GA 7

The Significance of Print Media 15

Media and its Relationship to Social Perceptions 15

Power Relations in the Publishing and Consumption of Media 18

Stage II: "AIDS Does Not Discriminate" 44

Historical Context: Changes at the Turn of the 21st Century 56

Historical Context: AIDS Epidemic in the Recent Past 66 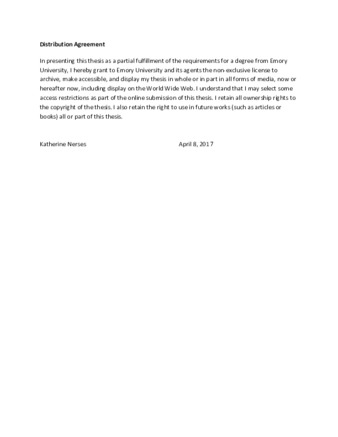