Taxonomies of human memory distinguish between memories that are accessible to monitoring (explicit) and memories that are inaccessible (implicit). Because nonhumans cannot provide the verbal reports that typify accessible memories in humans, it is difficult to directly assess the accessibility of memory nonhumans. However, recently developed metamemory paradigms provide objective behavioral measures of the accessibility of memory in nonhumans. Animals that can monitor their memory should perform better on memory tests if given the choice to decline trials when memory is weak, compared to when there is no option to decline tests. There is growing evidence that rhesus monkeys selectively decline tests when memory is weak (Hampton, 2001; Smith et al., 2003), but such evidence is limited. The goal of the present study was to test the robustness of monkeys' ability to monitor their own memory using a new foraging-like spatial test. Six rhesus monkeys performed a four choice delayed matching to location task. On each trial monkeys had to remember the location in which a preferred food was hidden in order to collect the reward after a delay. A decline-test response was concurrently available on some trials. Selection of the decline-test response allowed monkeys to avoid the memory test and resulted in a guaranteed but less preferred reward. Monkeys performed significantly better on trials with the decline option available than on trials without it, indicating that when possible, they appropriately declined tests when memory was weak. Monkeys transferred appropriate use of the decline-test response under three conditions that assessed generalization: two tests weakened memory and one test enhanced memory. These results provide converging evidence that rhesus monkeys are able to monitor their memory. This objective behavioral demonstration of memory monitoring in monkeys validates this animal model for the study of the neurobiology of accessible memory in nonhumans.

Monkeys vs. orangutans in a decline response paradigm...38
Neuroanatomy of metamemory...39 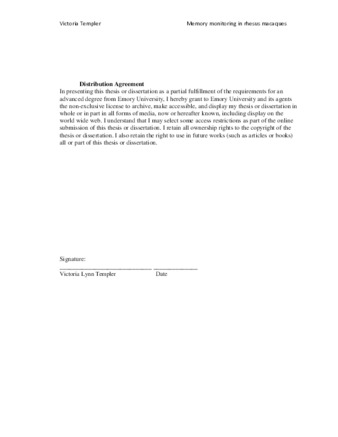