Animal models are weakened by unexplained variability in experimental outcome. For models of spinal cord injury (SCI), this variability and the lack of reproducibility in therapeutic effect is cited as a key factor inhibiting clinical translatability. The environmental influences that contribute to variability in outcome remain highly understudied. This thesis develops enabling technologies that continuously capture mouse physiology and behavior in the home-cage environment to characterize inter-animal variability before and after high thoracic spinal cord transection. This thesis tests the hypothesis that even strictly controlled genetic and environmental conditions do not fully mitigate inter-animal variability in physiology (respiration) and behavior (motor activity). Comparisons were made between adult male C57BL/6J mice as; (i) dual-housed littermates, (ii) littermates housed in different cages, and (iii) non-littermates. Housing conditions were otherwise identical. To avoid exaggeration of inter-animal variability due to unique animal interactions with experimenter and/or contact-based recording devices, I first developed a method for using ultra-sensitive electric field sensors to capture continuous, non-contact measurements of motor activity and respiratory rate in the home cage. Using this method, continuous 12-hour recordings of respiratory rate and motor activity were obtained daily for seven days in six adult male mice. Resting respiratory rate was found to be highly comparable in all mice at all time periods sampled. Motor behavior was characterized by alternative bouts of activity and rest. Same-cage littermates had similar activity profiles but this profile differed considerably between cages. Non-littermates exhibited significantly different overall activity levels. I next examined the temporal changes in respiration and activity for one-week after upper thoracic spinal cord transection. SCI led to an overt increase in inter-animal variability in both respiratory rate and motor activity. Differences in lesion completeness and extent were noted and may have contributed to the observed variability. Two characteristic features across animals were; (i) an early loss of episodic patterns of motor activity that appeared to recover after several days and (ii) respiratory rate that stabilized to a significantly lower value.

1.3 Monitoring variability in physiology and behavior: variables of interests and controls: 4

1.4 Developing methods to record physiology and behavior in the home cage: 5 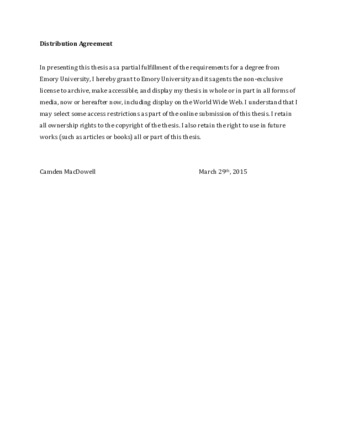