In 1948, the United Nations General Assembly adopted the Convention on the Prevention and Punishment of the Crime of Genocide (CPPCG) in response to the Holocaust which claimed over 6 million lives. Since the conclusion of World War II and the United Nations adoption of the CPPCG, the world witnessed genocides in Cambodia, Bosnia, Rwanda and my topic of discussion, Darfur. In 2003, a counter-insurgency conducted by the Sudanese government and Janjaweed militia claimed over 300,000 lives and displaced over 4 million people by 2007.

On July 14, 2008, the ICC indicted President al-Bashir of ten counts for sponsoring war crimes and crimes against humanity under the Rome Statute articles 7 (1), 8 (1) and 8 (f).1 Since the indictment, President al-Bashir is still at large and continues to commit atrocities against Darfuris with impunity such as dispelling 13 international humanitarian NGOs after the indictment was announced. It is my belief that the genocidal acts by the Sudanese government and Janjaweed militia between 2003 and 2007 are not isolated within this timeframe; however the consequences of the counter-insurgency have created conditions that have made the crisis in Darfur ongoing.

In his speech, Beyond Vietnam - A Time to Break Silence, Dr. Martin Luther King, Jr. utilized his moral vision, The Beloved Community, to address the atrocities committed by US forces in Vietnam. King's moral vision can be used to inform an ethical response to atrocities of the Darfur genocide as well as offer potential solutions for reconciliation. Human rights violations such as the killing of civilians, the deprivation of civil liberties of its citizens that occurred in Darfur, parallels to what existed in Vietnam and during the civil rights movement in the United States. In my thesis, I will discuss the following:

The sources of scripture, tradition, theology, politics, experience and reason King used in formulating his moral vision, "The Beloved Community." How King's moral vision can be used to point out the injustices of the genocide that occurred in Darfur A Christian response is necessary in post referendum Sudan; however, King's philosophy of nonviolence resistance could not be applicable in this situation

Chapter Four - An Analysis of the Darfur Crisis Through the Eyes of Martin Luther King, Jr....44

Chapter Five - Conclusion: Is the Beloved Community Practical in the Darfur Crisis?...58 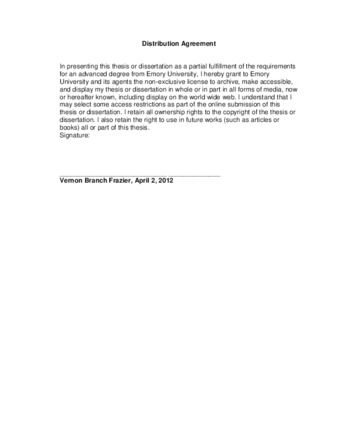