Background: Onchocerciasis, also known as river blindness, has been targeted for elimination because humans are the only reservoir, and ivermectin treatment is cost effective and readily available. Ivermectin control programs are often evaluated at the country level and little is known about the community drug distributors (CDDs) themselves. The kinship enhanced community drug distribution program was developed to address the issue of sustainability. The long-term sustainability of the programs depends on the CDDs because ultimately they are responsible for distributing ivermectin to their communities at high coverage levels for many years.

Objectives: This thesis explores how delivering ivermectin to kinship groups effects treatment coverage in Cameroon and Uganda and whether or not the effect has been the same in males and females. This paper will fill in the knowledge gaps by determining whether a CDD is more likely to reach the 90% distribution target if over 50% of the people he or she distributed ivermectin to were related to the CDD. Additionally, this thesis will look at whether there are differences between Cameroon and Uganda and males and females.

Methods: Surveys from 1,636 CDDs in Cameroon and Uganda were analyzed using a multivariable regression model was used that considered treatment coverage as the outcome variable. The model was a logistic model to determine whether a CDD delivering ivermectin to his or her kinship group is associated with 90% treatment coverage for an individual distributor. The model also looked to see if the factors are the same or different in Cameroon and Uganda.

Conclusion: There is a difference on the effect of distributing to a majority kin that depends on whether the CDD is from Cameroon or Uganda and male or female. 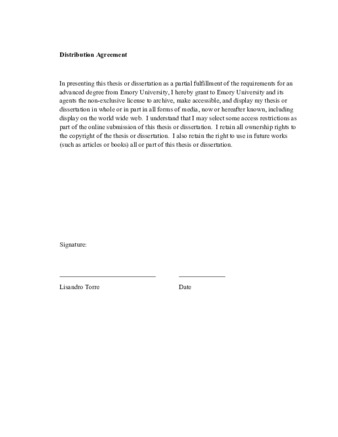