In the 1990s the population of the city of Atlanta grew for the first time since the early 1970s. Many of the newly arrived residents were white and middle class and this contrasted with the city's recent history which had been marked by decades of white flight and extreme class bifurcation. Far from a spontaneous reversal, Atlanta's business and political leaders had been working together for years to counteract the pull of the suburbs and attract middle class residents to the city. This partnership has been called a governing regime and it worked to take advantage of increasingly global networks of capital and people to create the thriving cosmopolitan city Atlanta's leaders have dreamed of since the Civil War.

This dissertation examines the changes that have taken place in Atlanta's physical and social landscape since the city hosted the Olympic Games in 1996 and places these changes within their local, national and global historical context. In addition to examining the global economic situation within which these changes took place and the governing regime that steered the city through these networks, this dissertation analyses the development of a tourist infrastructure in Downtown, the phenomenon of Intown gentrification and the creation of a consumer driven "live, work and play" neighborhood called Atlantic Station.

The governing regime is characterized as pro-Third Way because it defines the role of local government as facilitator for private business. This relationship has been arguably successful in recreating parts of the city but it has often done so at the expense of those who are least able to take advantage of the market. Whether it be from the destruction of public housing, displacement due to gentrification or increased antagonism toward the homeless, the city's most vulnerable residents are unlikely to see the changes to the city as positive.

Neoliberalism and the "Third Way"...8

The Third Way, Neoliberalism and Globalization...12

Globalization and the Global City...17

Regional Trends: The Rise of Sunbelt Cities and the (New) New South...29

The Absentee Mayor and Citizen Young...41

Underground Atlanta and the World of Coca-Cola...59

The Effect of the Olympics on Intown Neighborhoods...67

The Olympic Village and Olympic Park...71

4. THE POLITICS OF GENTRIFICATION IN POST-OLYMPICS ATLANTA...92

Neil Smith and Gentrification as a Critical Rhetoric...99

The Limits of Gentrification as a Critical Rhetoric...110

A Brief History of East Atlanta...117

Against Suburbia: Riverside and the Birth of Atlanta's New Urbanism...141

A Brief Overview of New Urbanism...145

Atlantic Station in the Atlanta Journal-Constitution...161

6. CONCLUSION: SPACE AND POWER INSIDE THE PERIMETER...177 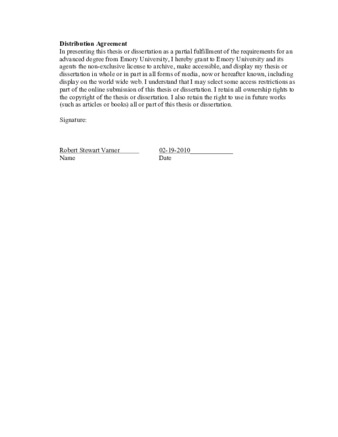