Visibility and Impact: The Role of Color on the Parthenon's Ionic Frieze
By Rebecca Levitan

Considering the painstaking effort, considerable expense, and numerous difficulties that were involved in creating the continuous Ionic frieze of the Parthenon in Athens, its placement far from eye level within the shadowy space of the pteroma seems counterintuitive. In contrast to the pedimental sculptures in the round or the metopes in high relief, both of which would have been visible from afar and clearly illuminated by Mediterranean sunlight, the frieze was created for a shaded, transitive space. For the past century, scholars have been baffled by the so-called "Paradox of the Parthenon Frieze," or why the Athenians made such a significant sculptural investment in a space with limited visual gains.

Greek artists used two tools to enhance the legibility of the frieze: relief carving and the application of pigment to the finished sculptures. Refinements in the carving of the frieze would have lent to its legibility, but they pale in comparison to the effect that color had on the viewer's ability to distinguish the many parts of the composition. In this thesis, I will argue that color provides the critical element that enhances visibility in the Parthenon frieze. This thesis re-evaluates the viewing problem of the Parthenon frieze through a study of the effects of color, and it includes an investigation of the use of polychromy on the Parthenon and the visual effects of these chromatic choices.

An understanding of the strategic use of color on the Ionic frieze has been incorporated into the second part of this thesis: an experiment in practical archaeology. For the experiment, full sized color panels were created to replicate the viewing experience of the northwest corner of the frieze. These frieze panels were installed on a to-scale replica of the complete Parthenon in Nashville, Tennessee, to gauge visibility and the role of color in legibility. The experiment along with this thesis will demonstrate that the role of color was paramount in the viewing experience of the frieze as it was originally conceptualized. 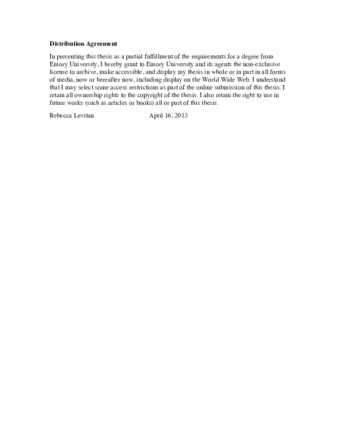