Assisted reproductive technologies, such as in vitro fertilization, sometimes include the process of freezing and storing unused embryos. Over the past several decades, the number of frozen embryos in storage has grown to roughly 500,000. These embryos are typically used in future attempts at pregnancy, for scientific research, or else discarded. Recently, however, it has become more popular for people to donate these embryos to others who desire to raise children: a practice often called embryo adoption.

The primary objective of this thesis is to examine the ethical challenges of embryo adoption through the lens of those who assert that personhood begins at fertilization, namely the Catholic Church, and explore whether embryo adoption may be a morally permissible practice. The Catholic Church's teachings about embryo adoption are particularly interesting because on one hand it asserts that embryos should be treated as persons with a right to life, while on the other hand it opposes the fertilization techniques that led to their existence. Official writings by Catholic hierarchy have tended to discourage embryo adoption for the same reasons that in vitro fertilization and other assisted reproductive technologies are considered illicit. Among other concerns, the Catholic Church believes that these practices unethically separate the creation of new life from an act of conjugal unity and consequently violate the fidelity of marriage as well as the rights of children. However, by considering each aspect of the embryo adoption process individually, this thesis argues that neither of these ethical concerns is necessarily applicable to the practice of embryo adoption.

Embryo adoption itself, I argue, can actually be viewed in a manner that is consistent with Catholic Theology. While the practice is often considered to be a method of assisted reproduction, there are ways in which it is completely distinct. Embryo adoption can be evaluated apart from reproductive technologies and instead assessed similarly to traditional infant adoption. The actual application of embryo adoption, however, raises other concerns that could lead the Catholic Church to consider it immoral in practice even if it does not consider it inherently immoral.

CHAPTER 2: HUMAN DIGNITY AND MEDICAL ETHICS IN THE CATHOLIC TRADITION 19

An Embryo's Moral Status 21 Principles behind Moral Status 30 Moral Deliberation 32 The Role of Catholic Ethics in Medicine 33 CHAPTER 3: FIDELITY IN UNITY AND PROCREATION 38 How Adoption Fits within the Aspects of Marriage 40 CHAPTER 4: ASSISTING REPRODUCTION 44 Difficulties of Infertility and Recourse to Treatments 44 CHAPTER 5: TRADITIONAL ADOPTION 53 Adoption and Catholicism 54

Whether Embryo Adoption Breaks the Unitive Aspect of Marital Sexuality 58 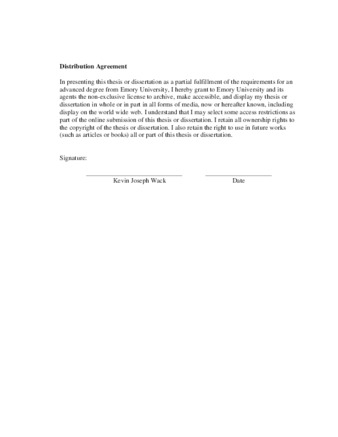