According to the gospels, Jesus spoke in parables. These brief, metaphoric narratives are windows through which we may glimpse the Kingdom of God. The power of the parable lies in the ambiguity of the language, rather than the artificial pretext constructed by the church over the past two millennia. Arresting and strange, parables do not immediately lend themselves to comprehension. In the aphoristic words of Multatuli, "An idea which one comprehends immediately is often not worth comprehending." If we are to hold the parables as something worth comprehending then we must reconsider how we encounter them. Jesus did not surround himself with the learned Pharisees or the wealthy and educated; Jesus dined with sinners and preached to the poor. Neither Jesus nor the gospel writers interpreted the parables for their audience. If we censor the parables by interpreting them for the church rather than with the church, we inhibit the power of the parable to cross the lines of what society finds acceptable. We must be willing to risk the parable, for if we do not, the power of the parabolic language may be stifled. This thesis considers what it means to encounter a parable throughout the development of one's faith by examining Greek exegesis, metaphor theory, Flannery O'Connor's use of the short story, and education theory. Although often taught as children's literature, the language of the parables exceeds the concrete cognitive abilities of juvenile interpretation. The role of the church is not the passive acceptance of biblical interpretations; as a church we must take an active role in parabolic engagement and interpretation as a part of the development of faith.

1.An Introduction to Parabolic Literature (1)

IV. Forgiveness of the Father

3. Parable as Literature: The Figurative and the Grotesque (37)

4. Teaching Metaphoric Language in the Church (54)

I. Erikson's Stages of Development

IV. Ears That Can Hear

A. Erik Erikson's Stages of Development 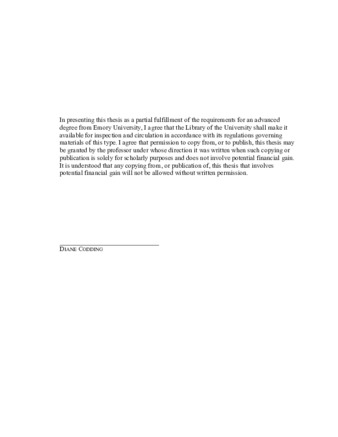