Glasses are formed by cooling, or quenching, a glass-forming material from above the glass
transition temperature Tg to below Tg. Once formed, glasses undergo a process named physical
aging to advance towards a stable equilibrium state because they are thermodynamically
unstable. Thin glass-forming polymer films have previously exhibited inconsistent physical
aging behaviors in that thin freestanding polysulfone (PSF) films 400 nm to 4000 nm thick have
previously exhibited an increased aging rate with decreasing film thickness behavior while thin
supported polystyrene (PS) films 100 nm to 2500 nm thick have previously exhibited no change
in aging rate with decreasing film thickness. We resolve this inconsistency by showing that this
difference arises because the PS and PSF films were prepared under different conditions. Various
conditions that may affect the aging rate of thin polymer films are then examined. In particular,
effects of mechanical stress during quenching and thermal conditions, such as annealing
temperature, quench temperature, and quench rate through Tg were examined. It is shown that the
aging rate of the thin film increases with respect to cooling rate at Tg, and that the quench
temperature Tquench and annealing temperature do not affect the physical aging rate. The
increased aging rate behavior of the film with increasing cooling rate was justified with a free
volume and a potential energy landscape argument. Specifically, it was noted that a fast quench
could trap glasses at a higher volume and energy state than a slow quench. Based on the
suggestion that the potential energy landscape can be altered with stress and strain, we propose a
possibility that stress during the thermal quenching process may trap glasses in a different
energetic state, inducing a different aging behavior than would be expected of quenched films
without stress. We hypothesize that, since thinner freestanding films - which undergo faster
aging - experience a larger stress than thicker freestanding films, aging rate increases may
correlate with applied stress, but more data must be collected before any conclusive relationship
can be drawn between stress and physical aging rate.

III. Open Questions and Goals of This Thesis 15 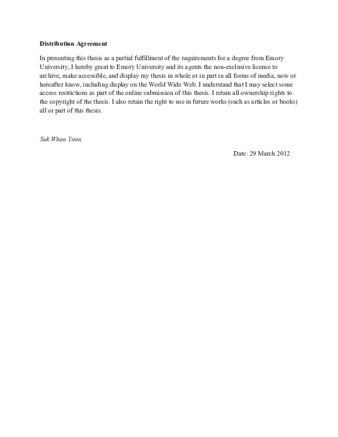