Given that men often dominate decision-making about sexual and reproductive matters within sexual partnerships in resource-limited settings, positive male involvement and participation in the effort to prevent vertical and horizontal HIV transmission is critical. There is a strong evidence base that male involvement in family planning, voluntary HIV counseling and testing, and antenatal care improves the uptake of and increases adherence to PMTCT strategies in sub- Saharan Africa. Gender inequality is the most salient barrier to male involvement and has been studied very limitedly from a male perspective.

Qualitative data analysis was conducted on secondary data from 15 focus group discussions conducted on men and women of reproductive age living with HIV and attending ART clinics in Lilongwe, Malawi. Despite being situated in a capital city, these ART clinics serve both urban and rural Malawians. Participants were asked about their reproductive knowledge, attitudes, and practices.

The five major themes that emerged from the data were: condoms; contraception; pregnancy and antenatal care; voluntary HIV counseling and testing; and ART. All five are components of comprehensive PMTCT programs. Gender norms and roles were found to strongly influence all themes. Within couples, men controlled condom use, family planning decision-making, and abortion decision-making, while also influencing HIV status disclosure.

This study's findings revealed disagreement between men and women and among men themselves on men's roles in sexual and reproductive health. This dissonance challenges public health providers to structure interventions that function effectively within these multiple realities while also striving to improve them. Programs that incorporate these different beliefs, attitudes, and behaviors and also balance the knowledge that men often control decision-making within sexual partnerships with the rights of women to control their own reproductive health behaviors and work to break down harmful gender norms may effectively improve male involvement in sexual and reproductive health and subsequently reduce pediatric HIV infections.

Chapter 2: Review of the Literature 8

2.1 The emergence of male involvement in sexual and reproductive health (SRH) 8

2.3 Male involvement in the avoidance of unwanted pregnancy 11

Expectations of condom use 26

The meaning of "protection" 28

Decision-making around contraceptive use 35

Independent and covert use of contraception 45

Covert and independent testing vs. couples' and family testing 60

Use of ART while in a relationship 68

The evolution of family planning 89 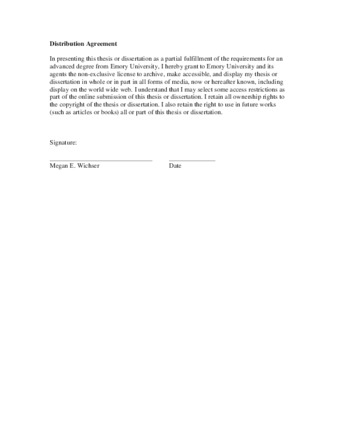