Abstract Specters of Bondage: Freedom, Desire, and Historical Memory in Post-Liberation Era African American Literature By Aida Ahmed Hussen Specters of Bondage: Freedom, Desire, and Historical Memory in Post- Liberation Era African American Literature is an interdisciplinary exploration of the figure of the freedom quest as it informs formulations of African American identity and collective memory in four novels written during the late 1970s and early 1980s. As Manning Marable has observed, narratives of the ascent from bondage to freedom have traditionally comprised an identity-cohering and spiritually sustaining premise for African American collective consciousness. Persistent and often violent aggression against black liberation movements throughout the 1950s, sixties and seventies, however, produced a crisis of faith in the foundational myth of teleological black freedom ( Beyond 19). Specters of Bondage argues that this crisis constituted a collective cultural trauma, and that African American literary production in the wake of the liberation era accordingly reveals symptoms of post-traumatic consciousness: for example, temporal and identitarian disorientation, and the psychic resuscitation, in varied forms, of the prior and contiguous traumas of slavery. Reading Andrea Lee's Sarah Phillips (1984), David Bradley's The Chaneysville Incident (1981), Octavia Butler's Kindred (1979), and Charles Johnson's Oxherding Tale (1982) as posttraumatic testimony to both contemporary and historical crises in black identity and representation, Specters of Bondage shows how these texts begin the work of engendering new identitarian frameworks that would accommodate a continuing desire for African American freedom while also acknowledging a profound shift in the possible terms of collective representation. Rather than romanticizing a mythic past of un-fractured black solidarity, Specters of Bondage views both past and present formulations of African American freedom and identity as valid objects of critique. A basic assumption of this dissertation is that homogenizing representations of African American identity and political desire have too often marginalized or obfuscated the voices of "internal minorities." Feminist analysis comprises an essential component of this dissertation's argument, insofar as it facilitates both historical and contemporary re-conceptualizations of race and identity in more comprehensive intersectional terms.

Chapter One "Mysterious Stores of Anger and Grief": History, Repression, and Ambivalent Desire in Andrea Lee's Sarah Phillips 26 Chapter Two Speaking of the Past: Traumatic Testimony and Discursive Healing in David Bradley's The Chaneysville Incident 73

Chapter Three Subjects of History: Domination and the Desire for Recognition in Octavia Butler's Kindred 116 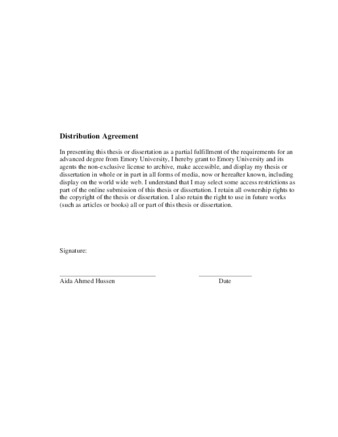