Abstract
Mourning News: Grief, Memory, and Television Viewership of 9/11
News footage of the September 11, 2001 attacks on the World Trade Center and the
Pentagon building were broadcast widely across network and cable television
programming. This dissertation explores in detail how a small group of seventeen
participants viewed that news, both on September 11 and in the week immediately
following the attack. Using in-depth interview responses, it contributes to a larger body
of scholarship that seeks to understand what it is viewers actually do while watching
news television during a national crisis. Qualitative in methodology, this dissertation is
interdisciplinary in its approach, combining seminal works in cultural studies, ritual
studies, and television studies to illuminate connections between the social construction
of meaning, memory, and television viewing. Additionally, it offers an historical analysis
of how interviewees viewed a number of significant American crises in order to provide a
foundation for understanding the complex processes involved in becoming an active
interpreter of the news. I argue against scholarly work that tends to depict news viewers
as passive and unreflective consumers, helplessly viewing hours of televised images on
September 11. On the contrary, for this study's interviewees, the reasons for watching
were manifold, and reflect neither a mindless nor compulsive urge to consume news on
9/11, but rather an intentional effort to employ an everyday practice during an
extraordinary event. I conclude that, although it is an ordinary practice, for the subjects
of this study, news viewing was also a complicated ritual that both enabled and
constrained them in their quest for meaning about the crisis at hand.

Mourning News: Grief, Memory, and Television Viewership of 9/11
By
Leah A. Rosenberg
M.A., Emory University, 2007
M.A., University of California, Irvine 1998
B.A., University of Maryland, College Park, 1994
Advisor: Gary Laderman, Ph.D.
A dissertation submitted to the Faculty of the
James T. Laney School of Graduate Studies of Emory University
in partial fulfillment of the requirements for the degree of
Doctor of Philosophy
in the Graduate Institute of Liberal Arts
2011

Chapter 1
Television in Ordinary Times: Recalling Pleasure, Place, and Family 37
Serious Pleasure: Memory and Television 40
Time and Place: Experiences of Viewing 55
The Way We Were: Family, Sociality, and Identity 64

Chapter 2
Remote Closeness: Viewing, Understanding and Using
News Television 73
Our House: The Evening News and Other Nightly Rituals 77
News as Social Practice: American Religious Culture 88
"And that's the way it is": Discussing the Significance of Cronkite
and Stewart 93
Viewers Are Doin' It for Themselves 99

Ruptured Place: Interpreting the Significance of 9/11 180 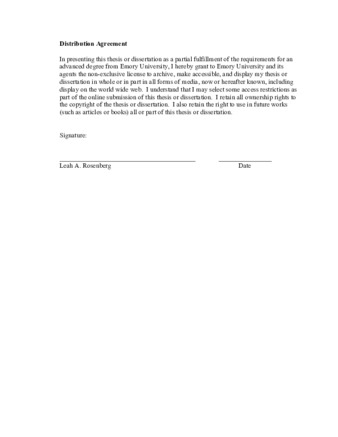