In 1735, John Wesley came to America, bringing Methodism along with him. Wesley's trip lasted only two brief years, but by 1850, Methodism dominated the "American Religious Economy."1 This explosive growth presents an obvious question, how did it occur? Scholarship on this topic has shed light on a wide variety of political, social, theological, geographical, and musical factors influencing the growth of the Methodist Movement. Proselytizing proved to be the foundation of the Methodist Movement. This thesis: Hymnody: A Critical and often overlooked aspect of Methodist revivalistic expansion will focus on a specific aspect of the Methodist movement, as an exploration of all reasons proves beyond the scope of this study. The Revolutionary War and the Second Great Awakening, 1776-1835, historically frame this study. Hymns are by no means the sole reason for the expansion of Methodism, but they played an important supporting role. Chapter 1 outlines the premises of the main argument by presenting information on hymnody, John Wesley, and revivals, laying the foundation for a chronological study. Chapter 2 begins the chronological study by examining the Great Awakening and Francis Asbury, the most influential American bishop in the denomination's history. From Asbury the narrative leads to the Second Great Awakening examining Peter Cartwright who was a convert and circuit rider in the movement. The lessons learned about the tangible displays of faith, what scholars label, the emotionalism of revivals, can be applied to the present. The United Methodist Church has been in decline since the 1960s, and is now attempting to return to its roots as a means of fostering growth. The church has turned to revival in its time of need and this method of outreach might contribute to a possible re-emergence of Methodism.

A. History-Methodism and Moravians 2
B. Musicology-Lyrics and Music Theory 5
C. Comparative-Watts and Dorsey 6
D. Personal Disclosure 8 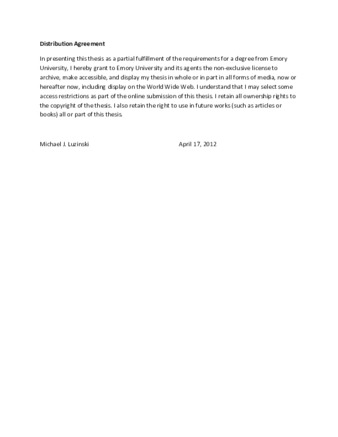