Motor deficits are the clinical hallmark of Parkinson's disease (PD), and are the direct result of degeneration of dopaminergic neurons. This degeneration is thought to be caused by aggregated alpha-synuclein found in Lewy bodies in the locus coeruleus, substantia nigra pars compacta (SNpc), and other brain regions. More recent studies have shown that alpha-synuclein aggregates can be found in the gastrointestinal system of PD patients before motor symptoms begin, suggesting there could be a temporal and anatomical link between synuclein aggregation in the gut and the brain in PD. Currently there is not an accurate rodent model that could be used to study how aggregated alpha-synuclein in the gut may contribute to alpha-synuclein aggregation in the brain. Most rodent models address and focus on certain features of the disease but do not recapitulate all aspects of the disease, and few recapitulate gut pathology.

Our laboratory has developed a new mouse model to investigate the role of alpha-synuclein aggregation in degeneration of the noradrenergic system in PD and its relationship to dopaminergic neurodegeneration. In this transgenic mouse model, neurons express wild-type human alpha-synuclein under the control of the dopamine beta-hydroxylase (DBH) promoter, the rate-limiting enzyme in synthesis of norepinephrine. We expect to see human alpha-synuclein expression, phosphorylation, and aggregation, not only in the LC of the transgenic mouse model, but also in the noradrenergic terminals of the gut. We predict that aggregated human alpha-synuclein in the gut will lead to intestinal inflammation, which may promote propagation of alpha-synuclein from the gut to the central nervous system via the vagus nerve or dorsal motor nucleus (DMN) of X. For this thesis project, I confirmed that the human alpha-synuclein transgene in the bacterial artificial chromosome (BAC) under the control of the DBH promoter and regulatory elements was being transcribed into mRNA and translated into protein in the small intestine and colon of transgenic mice with age-dependent accumulation. I also confirmed co-localization of human alpha-synuclein to enteric neurons through immunofluorescence, and I also found differences in levels of the cytokines interleukin-6 (IL-6) and transforming growth factor beta 1 (TGFß) between transgenic and non-transgenic mice indicative of preliminary inflammation. 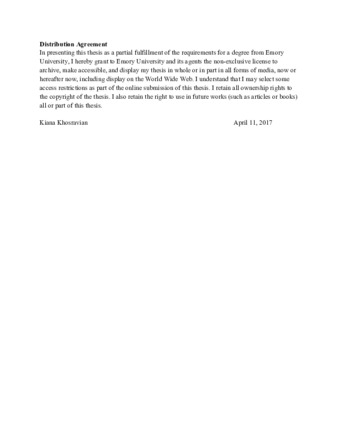