Background: Unsafe abortion causes 13% of all maternal deaths worldwide (WHO, 2011b). In Uruguay, prior to 2001, unsafe abortion caused ~30% of maternal mortality (Briozzo et al., 2004). In 2004-2012, nationwide implementation of a harm reduction model coincided with a steady reduction in abortion-related death. In 2012, 1st-trimester abortion was decriminalized with several restrictions. No data were available on the extent of gynecologist training in the abortion, to help determine the degree to which lack of training is a cause of decreased access to safe abortion under the new law.

Methods: Cross-sectional structured survey using convenience/snowball sampling of 40 gynecologists (37 in-person surveys, 3 via online survey) totaling 42% of gynecologists currently practicing in in the public sector in Montevideo (approx. 90). Montevideo was chosen because, as the capital city of Uruguay, its metro area is home to 51% of the country's population.

Conclusions: Based on the very high prevalence of abortion training amongst respondents, it appears that lack of training is not a major barrier to access. Montevideo gynecologists appear to be trained in both medical and surgical techniques of abortion care, whether through abortion training or miscarriage management training/experience. Because 85% of respondents reported having seen an abortion patient with advanced gestational age, barriers to early access to abortion as well as to contraception should be further researched and extending the gestational limit should be explored. 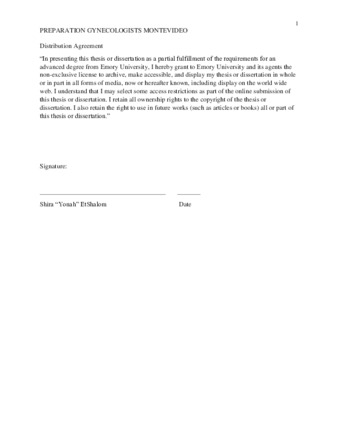