In the late 19th century, a group of public Black female leaders began a range of racial uplift initiatives in the areas of education, social welfare, healthcare, journalism, and intellectualism. Known as race women, these leaders commandeered the public sphere with a missionary zeal to improve the plight of Black people. My dissertation Race Women: The Politics of Black Female Leadership in 19th and 20th Century America uses methods gleaned from history, Black feminist theory, and literary criticism to examine the lives, intellectual production and activist work of these race women, while simultaneously interrogating Black women's relationship to the term itself. Included in my study are a range of 19th and 20th century women including Maria Stewart, Anna Julia Cooper, Ida B. Wells-Barnett, Mary Church Terrell and Pauli Murray. Coupled with my analysis of the speeches and autobiographies of race women is my examination of novels by Frances Harper and Alice Walker. The dissertation argues that race women turned to a range of genres including both fiction and autobiography to communicate their hopes for African Americans, to theorize the nature of racial identity and womanhood, and to construct their own notion of subjectivity. While grounded in the theoretical perspectives of Black feminist theory, my project is also attendant to race women's complicated relationship to the politics of feminism. Consequently, I both employ and challenge major Black feminist theoretical frameworks like intersectionality, standpoint theory, the politics of respectability and the culture of dissemblance, considering both the advantages and limitations of using these paradigms.

Race Women Confront All Phases of the Race Question 1 Chapter 1 The Race Woman's Agenda: Anna Julia Cooper, A Voice from the South, the Textual Inauguration of a Black Female Leadership Tradition 22 Chapter 2 "The Story of Her People and Her Times": Ida B. Wells-Barnett and Mary Church Terrell in the African American Autobiographical Tradition 79 Chapter 3 Breaking the Rigid Molds of Respectability: Pauli Murray's Quest for an Unhyphenated American Identity 144 Chapter 4 Out of the Shadows: Race Women's Novels and the Inauguration of a Womanist Ethic in Black Feminist Thought 208 Epilogue Leading Ladies: The Continuing Relevance of the Race Woman in the 21st Century 265 Works Cited 280 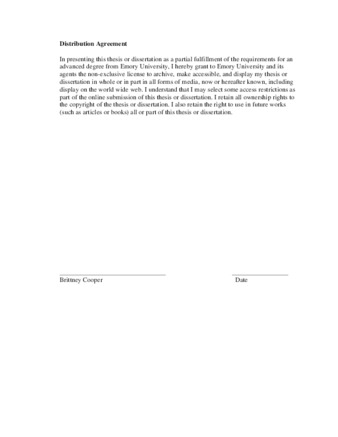